As I type this I'm back offshore at work again. I can't really complain as it's been an excellent time off with plenty of things looked at. The whole situation has been vastly improved by having a set of wheels again after 7 years. Do I look pleased? I think I might. 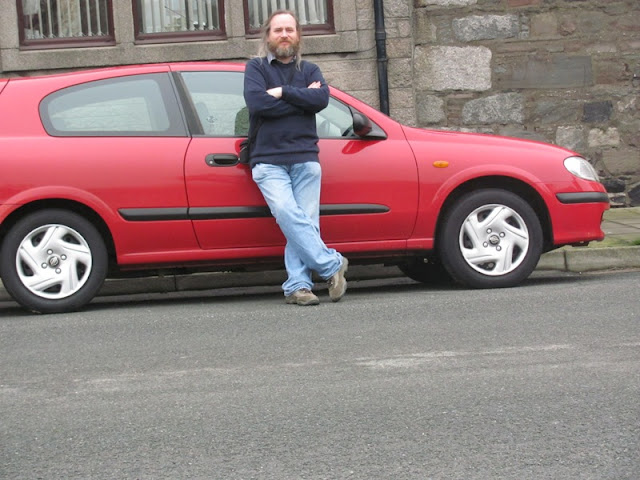 Now that I'm able to get to places, I've bought myself a membership of Historic Scotland which at £3.56 a month isn't at all expensive. I've been into 5 different places with entrance fees so far which means it's already paid for itself easily. Most of these places will appear here as their own blogs sometime soon but travelling around by car means it's easier to stop and see other things as they appear.
It was quite by accident that I passed the Torhouse stone circle. I visited this a few years ago with Bev and we thought at the time that it was a remarkable neat and circular stone circle. Unusually there are three boulders in the centre of the circle. 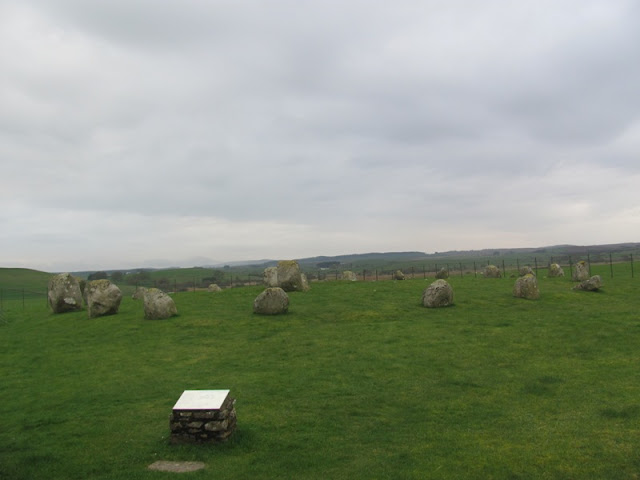 Here we are looking though the circle directly at the boulders in the centre. I think that they are probably an alter but there is a local legend that says that central stone marks the burial spot of King Galdus who is believed to have fought the Romans in 80 AD. While we're in the area of dubious facts, there's also a theory that it is from King Galdus that Galloway takes it's name. 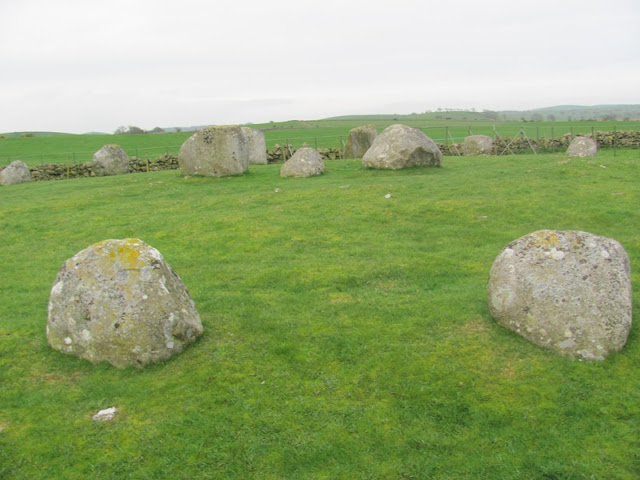 In the field across the road there are another three boulders which the same local legend says are three of Galdus' generals. 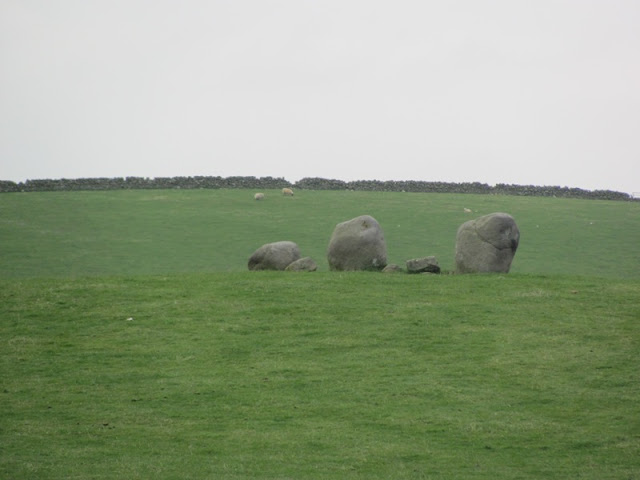 Back at the ranch, a very pleasant bottle of beer from Alloa if the label is to be trusted - I'd nearly finished it by the time I remembered to photograph it. 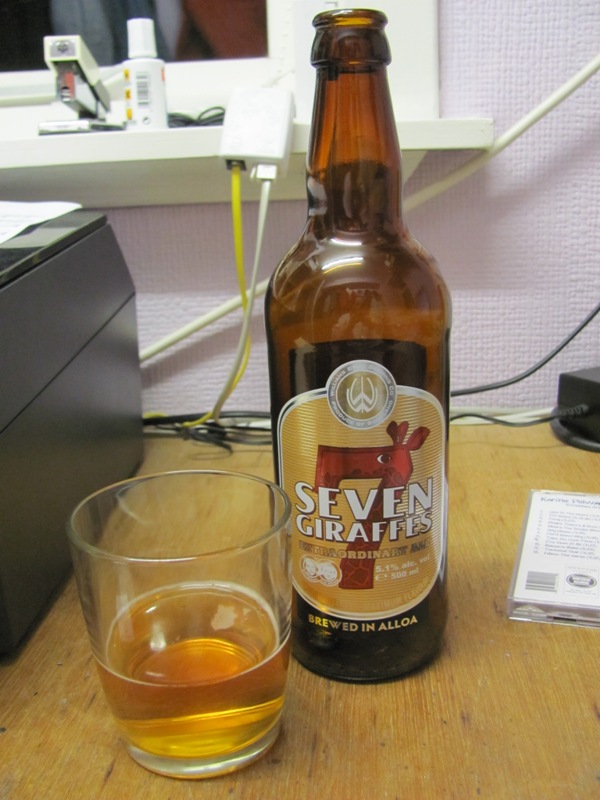 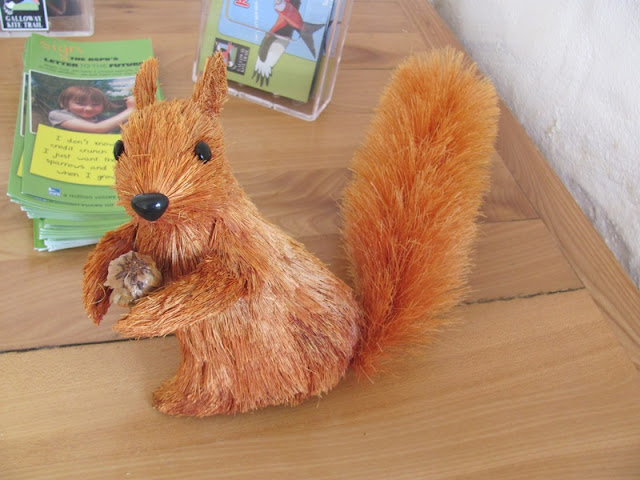 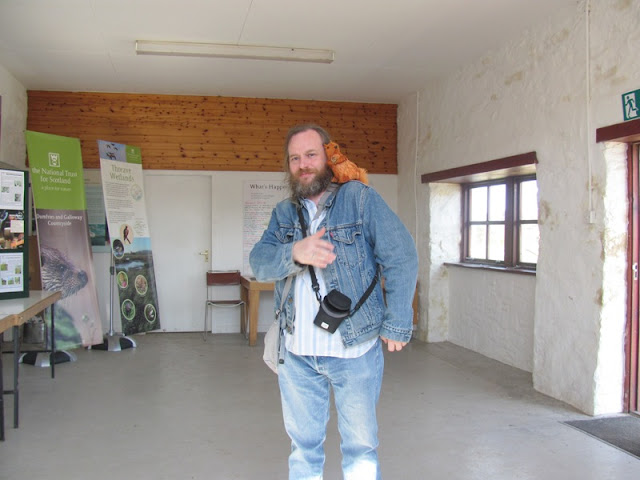 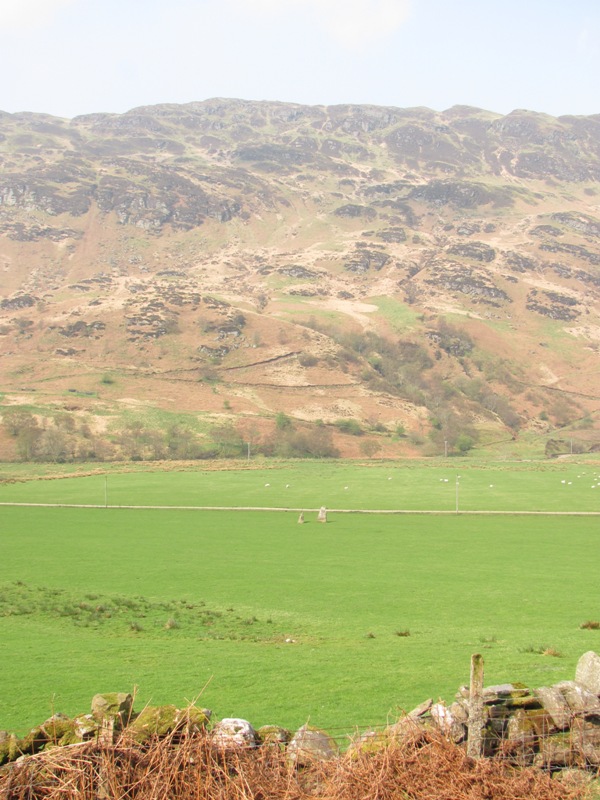 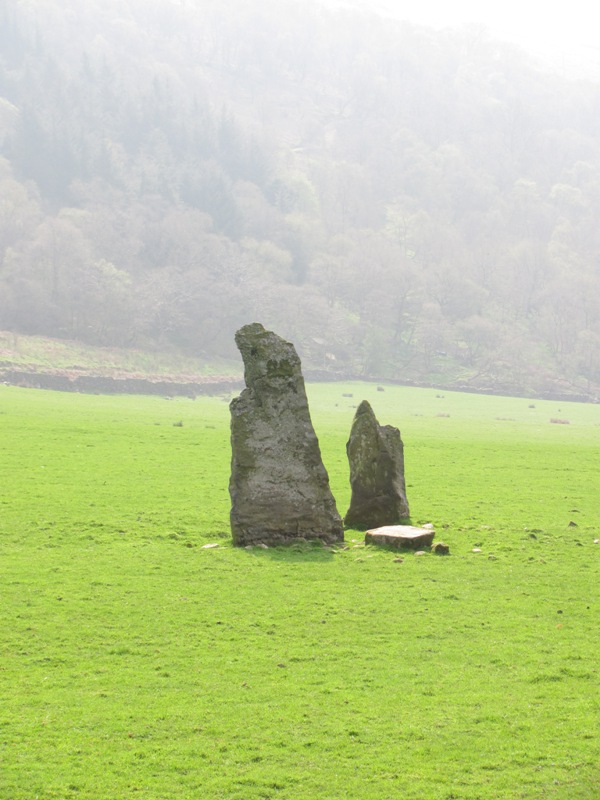 When you look at the larger stone (you can't really see it in this picture) the grain of the rock is very wavy and over the thousands of years, as pieces have fallen off the stone it has given it a rather curvy appearance. 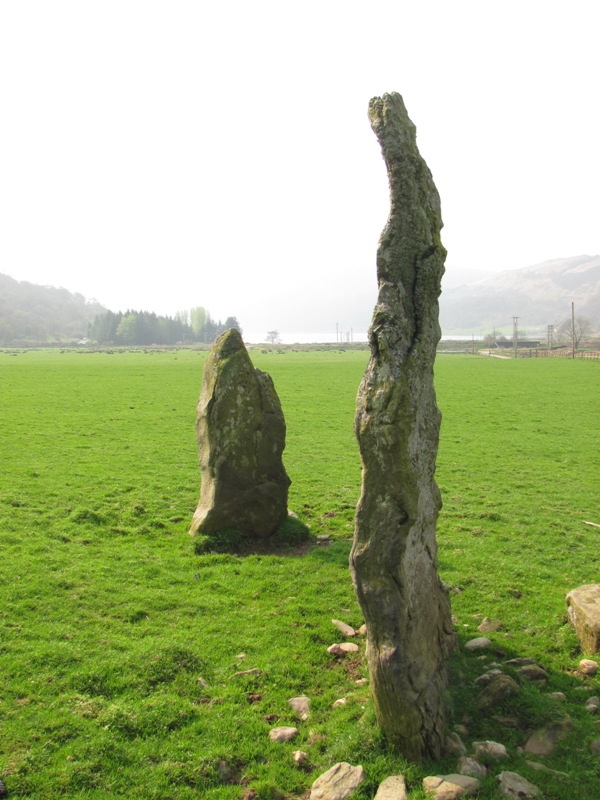 Some tadpoles in a flooded area of the same field as the standing stones. 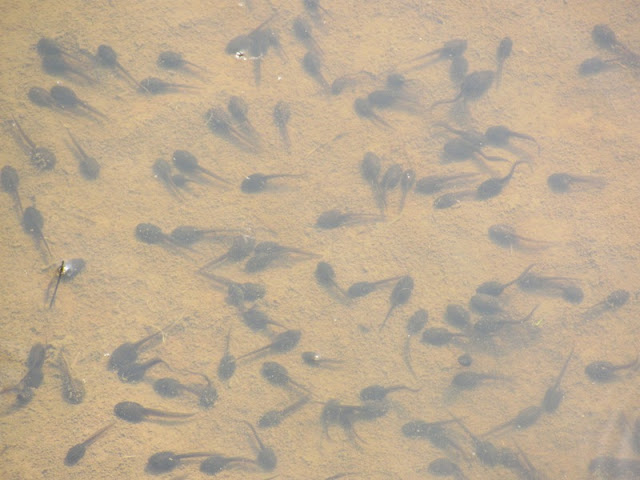 After my cup of tea served on a platter at the Coffee Angel in Edinburgh a few weeks ago, it seems the idea has caught on with a cafe on Dunoon. 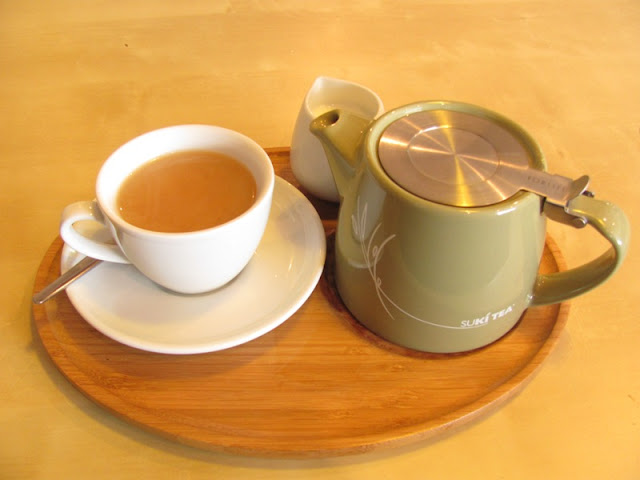 This is Huntingtower castle just outside Perth. I happened to pass it and popped in since my Historic Scotland membership covered it. 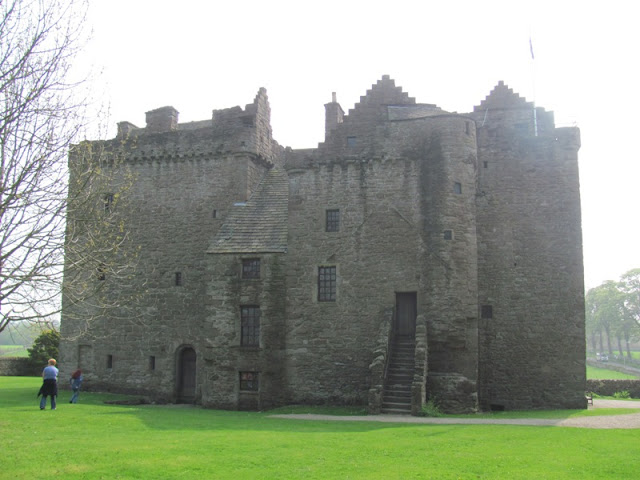 Of architectural interest but other than that it's very empty except for this original medieval ceiling which was discovered in 1912 when the castle went into trust. 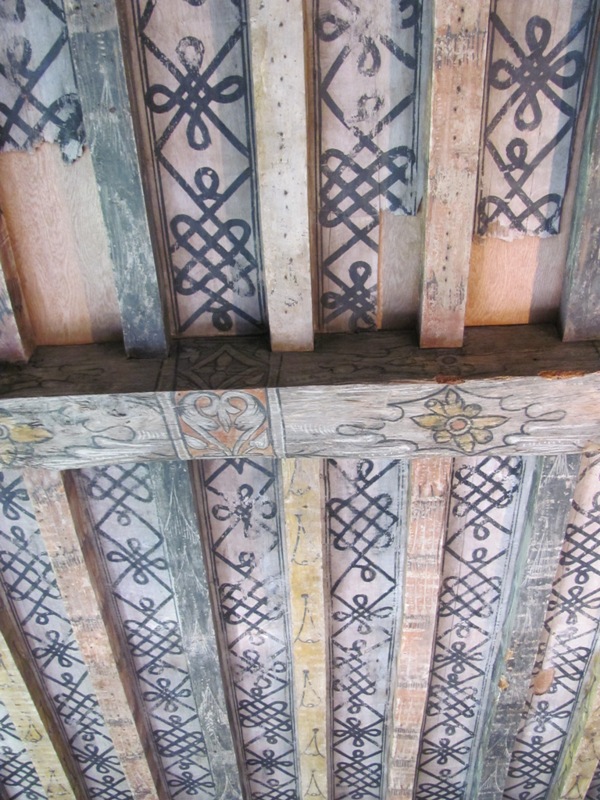 As I was in Dunoon visiting the kids just before I went to work, I decided to take the scenic route to Aberdeen through the Trossachs. Here's some scenery to prove it. 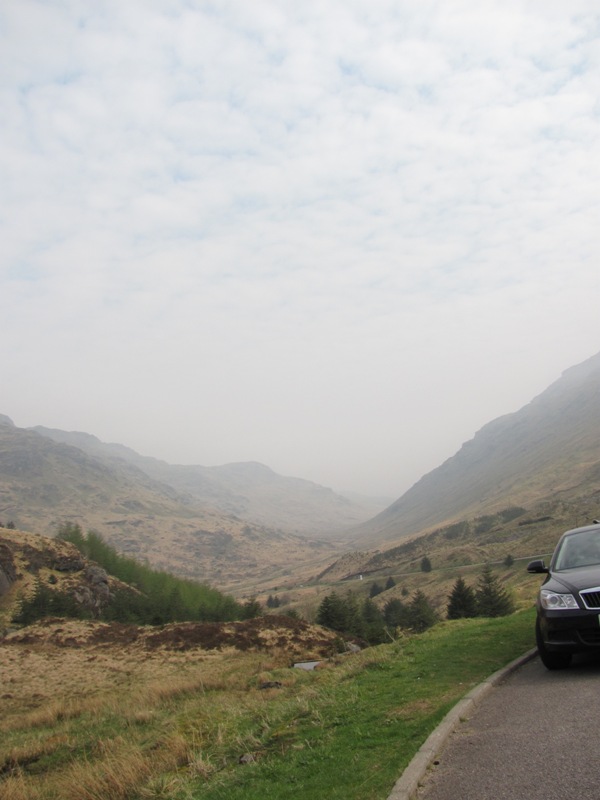 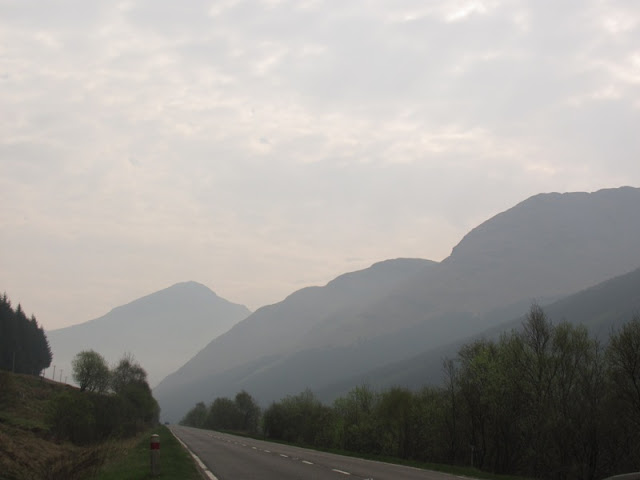 I bought a cup of tea and a scones from a wee cafe at the side of Loch Lomond which had this view. There are far better views of Loch Lomond. I nearly got run over crossing the road to get this picture - the road's not the best. The scone on the other hand was the best - well worth stopping for. 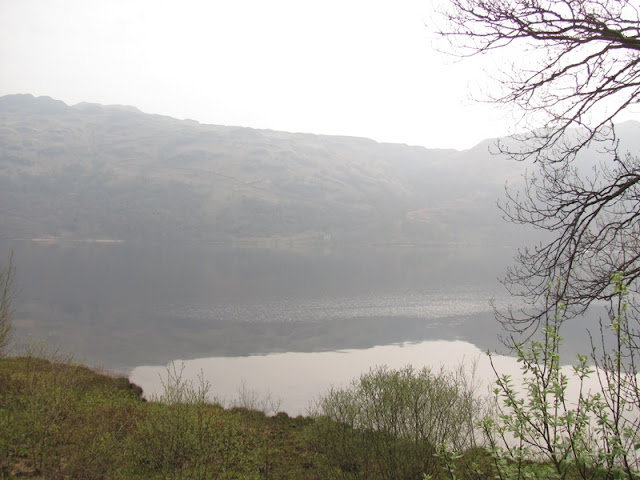 Just to finish off, a few pictures of the sun setting over Galloway. 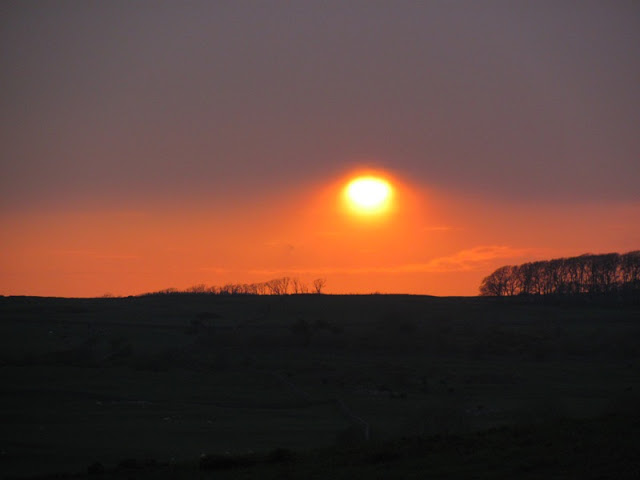 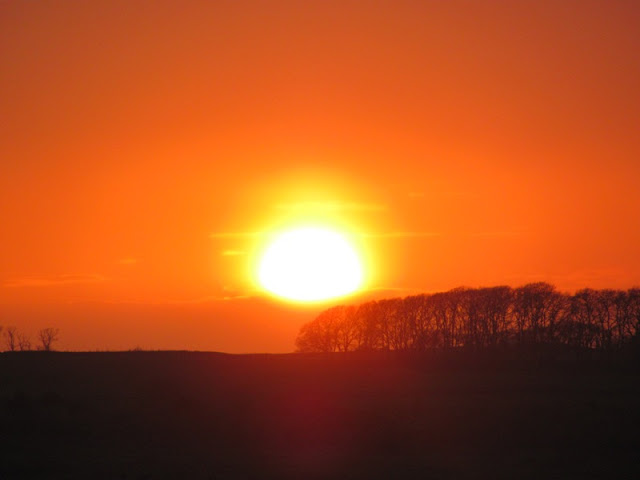 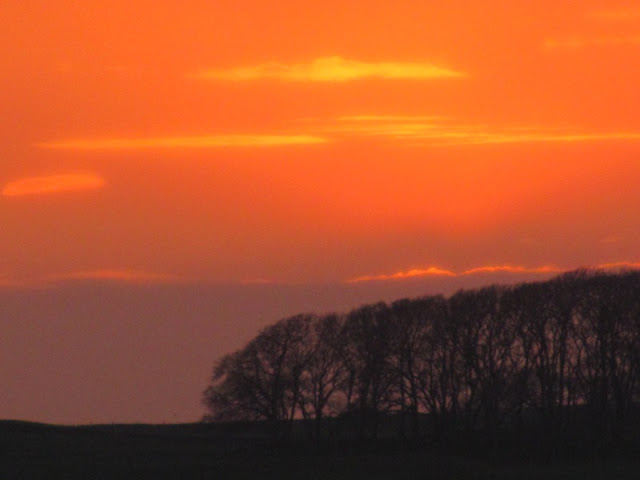 Posted by Sandy's witterings at 15:37

Love your photos, so nice to see the things you find on your travels :) The sunset photos are just wonderful but my favourite out of this selection is the ceiling painting, I love things like that. Thanks for sharing :) p.s never tyhought I could have brought you back a bottle of Chinese beer, even I got to enjoy it lo X

I went without a car for awhile. That lasted for about a year and a half. Too cold riding a motorcycle all the time. Enjoy that new-found freedom the car provides. I am of the belief that well placed stones are no more than that. The ancients thought "Hey, lets set some boulders up in a circle. It'll really mess with their minds a couple thousand years from now."
I think I saw that castle in a Monty Python film. Great sunset shots.

The photo's of the standing stones in Argyll are fascinating, they grabbed my attention as soon as i saw them and i'll probably spend a few hours browsing the net to see what i can find out about them.

Fantastic photo's of the sun setting, always a magical moment in time, to see.

torhouse looks good like the rollrights right down to the whispering knight's, if you've not been there yet it's well worth a visit.
nice one having wheel's again there's going to be no stopping you now.
ps,, how long before you get the fluffy dice, go fast line's, and big speaker's in the back.

Just back from China Poppy - the camera does give sunsets a wee helping hand on the colour front. I saw a similar style of ceiling a few weeks ago but better I think at http://miceforlent.blogspot.com/2011/03/friggers-and-other-things.html

Johnny (your name appears on your profile I see now)- I've never been on a motorbike in my life but can imagine it would be cold (I'll save that experience for a later lifetime now I think). Your theory on the boulders could be as right as many others I have heard.

Just of the Comfortably Numb Poppy - they were lovely stones - here's a start for your surf - http://themodernantiquarian.com/site/5736/balliemore.html .They must be quite unknown as the megalithic portal usually comes up when you surf that kind of thing but not this time.

Billy - Now I can get places I'm sure the Rollrights will get visited sometime.
p.s. No fluffy dice yet but Bev gave me a Banksy Air freshener which is on rear view mirror duty instead. Car sounds currently quite low tech too.

That ceiling is a real gem, perhaps an early bit of DIY? I like the bend above the sun in that first sunset picture too. Looking forward to more four-wheeled wanderings and witterings.

I love that medieval ceiling ( somewhere else i haven't been!), beautiful photos. You must be so enjoying the wheels, i just have my own car again after sharing for too long & feel free again lol. Be great to see you at the red den if ever you are passing, i am not always there, but feel free to introduce yourself to my dear Mom ;-) I haven't been able to get my camera out fast enough to catch our hare either.

Congrats on the automobile Sandy!
It certainly does give one a bit more freedom for sure, except the bank loans needed for petro & repairs!!! Be careful when picking up strange little animals, they could bite!!!
Michael

Good to see you getting around Sandy.
The three stones in the middle at Torhouse are known as King Gauldus's Tomb...mythical Scottish king.

A moonlit night dance around the stones with a lovely lady springs to mind.Magical !

well those look like more standing stones to add to our list. I suspect we've already been to that tea shop by loch Lomond, but must make a note to visit again, crafty green Boyfriend being rather partial to a good scone. We'll also need to add seven Giraffes to our list of beers to be drunk, seeing as we collect real ales. I used to write haiku about them, but lost that particular habit

Your photos are great!
I have just stumbled upon your blog and enjoyed seeing the standing stones in Scotland.

I live near Avebury, so it is good to see and hear about other sacred stones in other parts of the country. Tea shops are a must when visiting special sites. I would also like to visit Loch Lomond someday!

All the best,
Jo May.

Shundo, I think the 4 wheels will definately increase the number of bloggable things I see but will likely reduce the time I have to blog it - not quite sure where that will leave me.

Good idea Jim - if a lovely lady happens my way, I'll be straight out there.

Ruthie, camera out or not - hares definately count as a day improving wildlife moment.

Juliet, the 7 giraffes is to be found in any Tescos - I believe scones of such quality may be limited to the one cafe though.

Welcome Jo May, When I moved here to Blogger it was just after my couple of years spending a lot of time in Wiltshire. I am very familiar with Avebury and spent many an afternoon trying to work out how to get out of the sofa in the corner of the Red Lion.

I found you through Juliet, the Crafty Green Poet. I've thoroughly enjoyed the browse, and will be back.

Scotland is one of those places that exists mostly as a large blank space in my mind. I've been to England, and have researched Ireland from afar, but to actually see a photo of Loch Lomond? A bit of a shock, that.
My response was something like, "What? It really exists?"

Really, lovely photos and nice writing about it all. Much to learn about, here.

Shoreacres - thank you for your visit. Loch Lomond is definately real - by area at is the largest Loch or lake in Great Britain at 27 square miles. Loch Ness, mind you, is much deeper and therefore has a lot more water in it at 1.8 cubic miles. Both are really quite beautiful.

You have certainly bolstered my resolve to get back to Scotland. I lived a while in Edinburgh as a child. My lasting memory of Loch Lomond was falling and unable to stop rolling down the hill of gorse, I almost ended up unceremoniously in the water. Many days of picnics and fishing there.
I think I saw that castle in an old black and white movie about Bonnie Prince Charles' flight to the Isle of Skye (being of direct Macleod heritage myself it interests me to see what my lot got up to as they were involved with that).
Fantastic photographs each and every one.