Aberdeen Art Gallery have gone down the same route as the Edinburgh galleries and are now allowing photographs. So I dashed in to try and get a few of my favourite pieces before they changed their minds.

This is Family Group No 3 (Angle) by Henry Moore. It is one of the smalled Moore sculptures I've seen and also one of the nicest. If I ever have a mantelpiece, I should like this sat upon it (I should stop here or I will be putting myself top of the suspect list if it ever disappears) 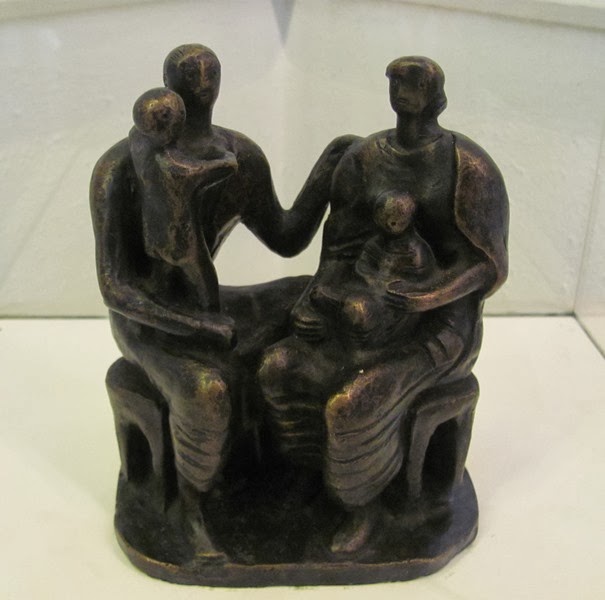 Another of the Aberdeen pieces I would like, though perhaps too big to slide under a jacket or balance on a mantlepiece. It is The Thank Offering made in 1939 by Benno Shotz. 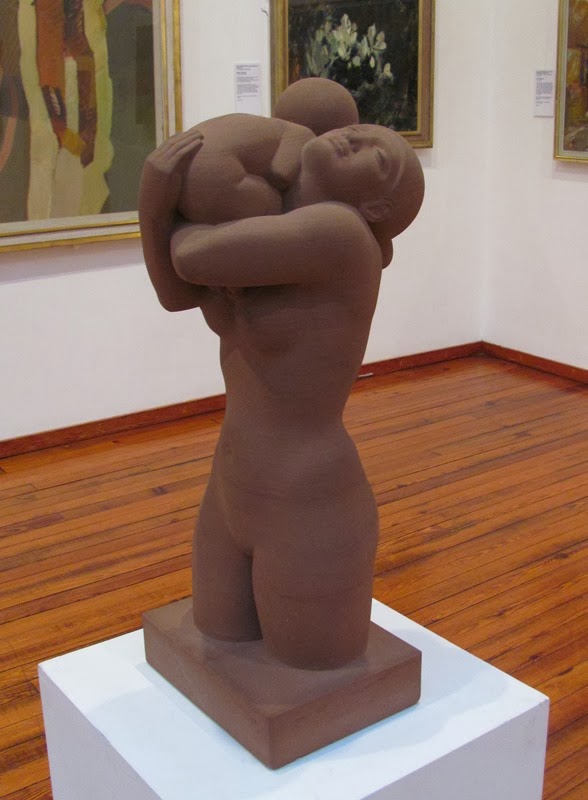 Apparently the University of Glasgow have a bronze version of this (I can't find it online) but I think the grain of the sandstone seems to emphasis the curves of the sculpture. 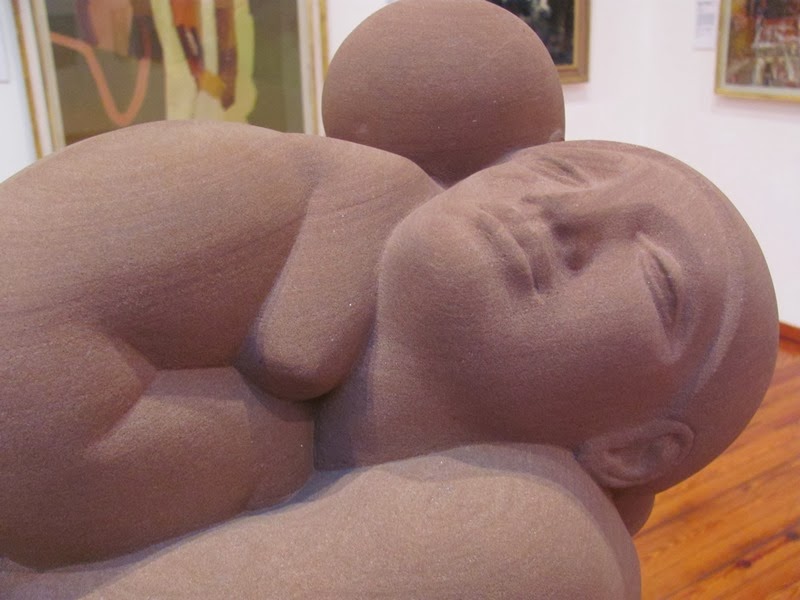 L.S. Lowry usually makes us think of his stick people and factory scenes - this painting (1941) has both but they are not so noticeable in comparison to the Derelict Building. It's got quite a different feel to what we come to expect from him. He also did a lot of great and very simple sea scenes. You'll have to excuse the reflections in the glass in this one - most of the pictures in the gallery are glazed but here I feel it's worth putting up with them to see the picture. 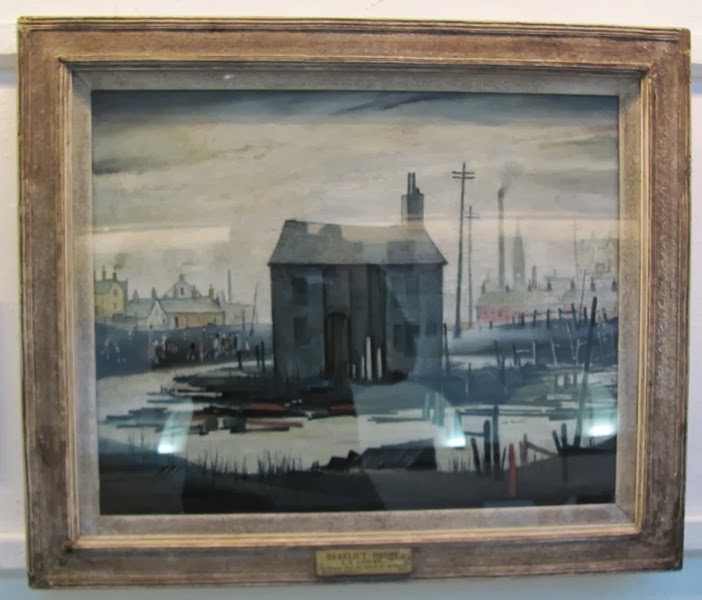 No glass on The Model and the Drifter (1995) by Jack Vettriano. The man seems to get a bit of stick from the art establishment from time to time - I expect the great success he's had has encouraged much of this criticism. 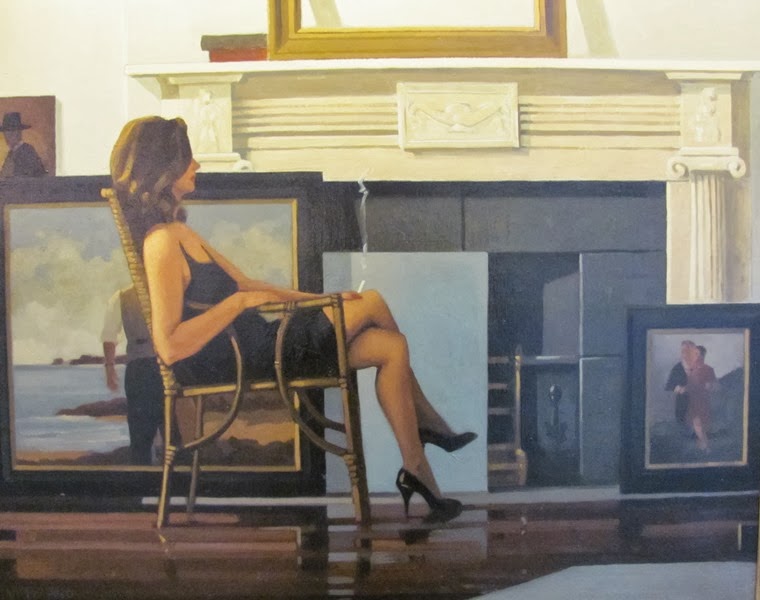 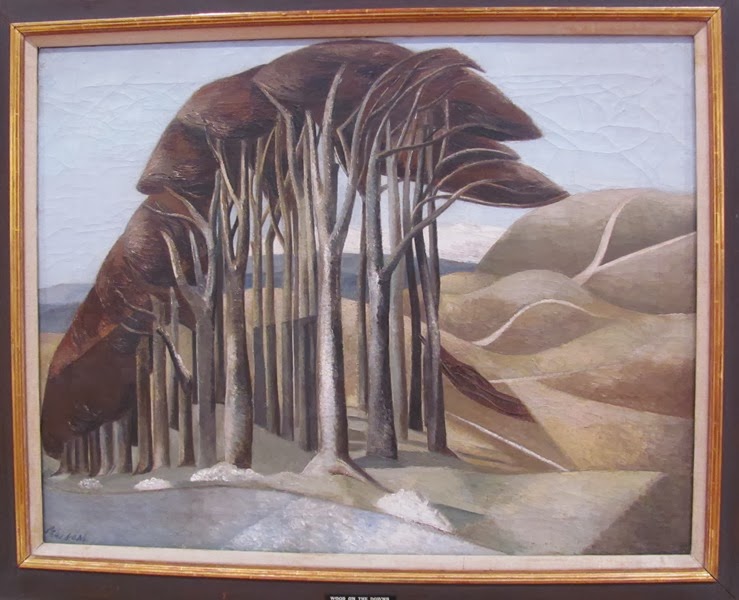 I believe every gallery in the world has a Degas Bronze. Doesn't make them any less lovely. This one is Position de Quatrieme Devant sur la Jambe Gauche (1882-95) 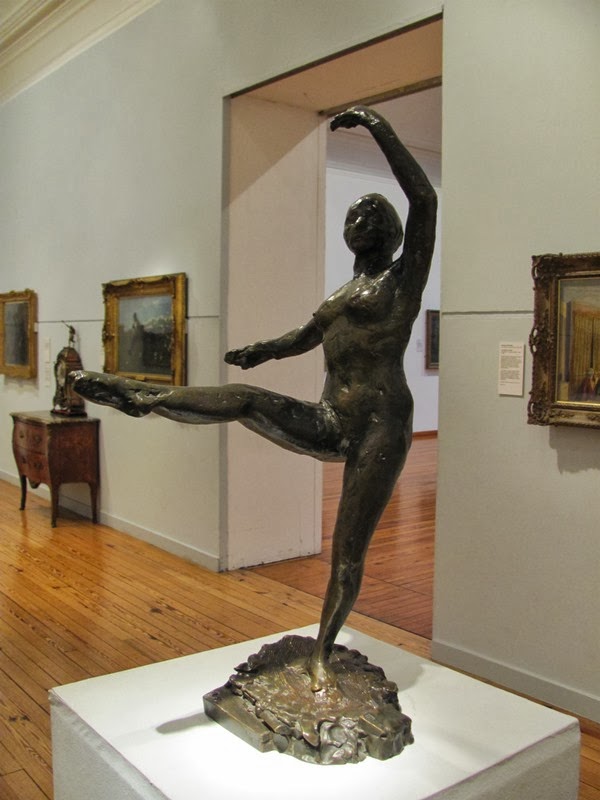 This is the first painting I saw of Bessie MacNicol. I thought it had some characteristic similarities to EA Hornel, which is hardly surprising as she visited Kirkcudbright and was influenced by his style. When I visited Hornel's house last year, I saw a portrait Miss MacNicol had done of the great man - it makes an appearance in this blog.

The picture here is Autumn from 1898, perhaps the nicest of the paintings of hers I have seen. 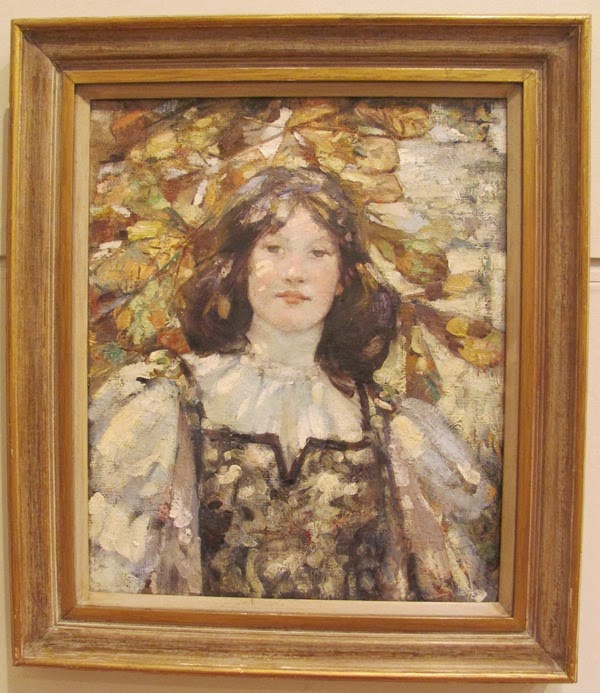 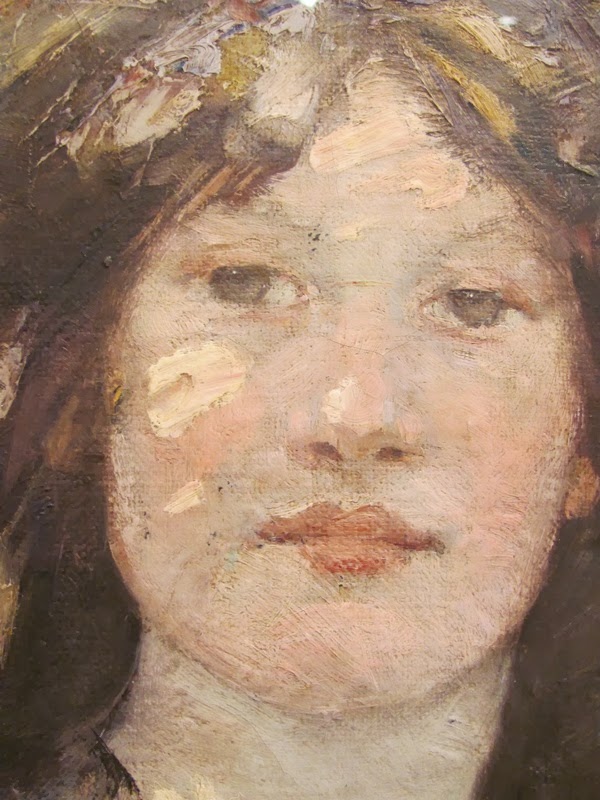 To Pastures New (1883) by James Guthrie  also has an EA Hornel connection. For a while a stuffed goose was exhibited in Mr Hornel's house and it was claimed that Guthrie used it as the model for one (perhaps more) of the geese in this painting. 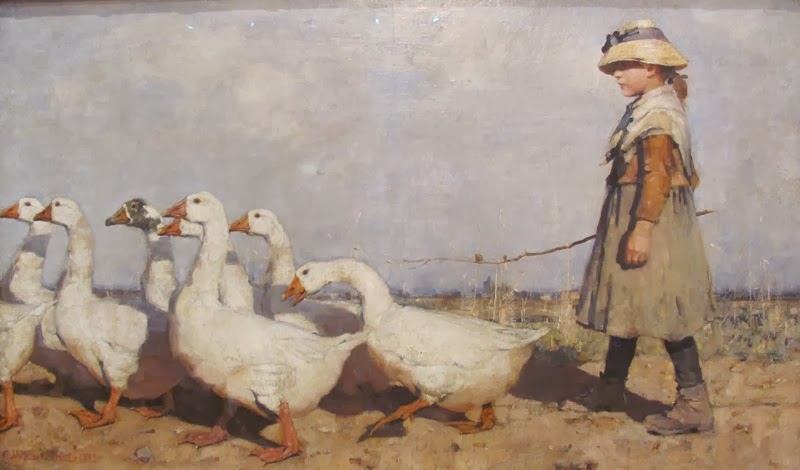 Herakles the Archer (1908-09) by Emile-Antoine Bourdelle 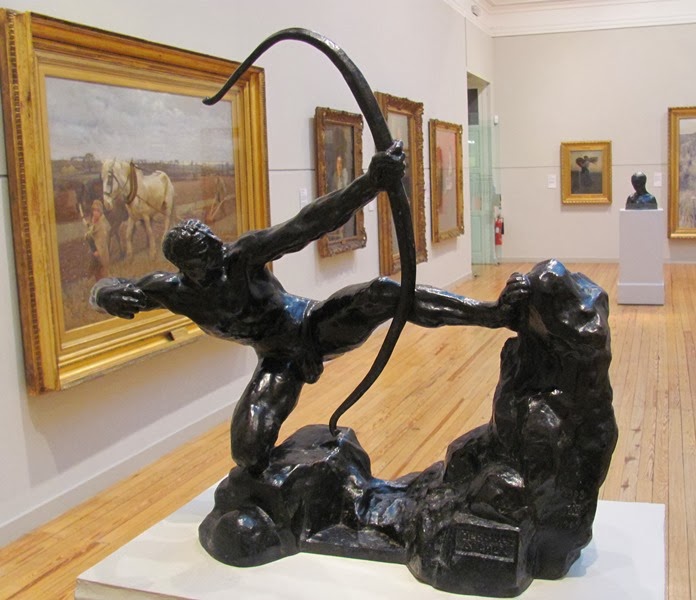 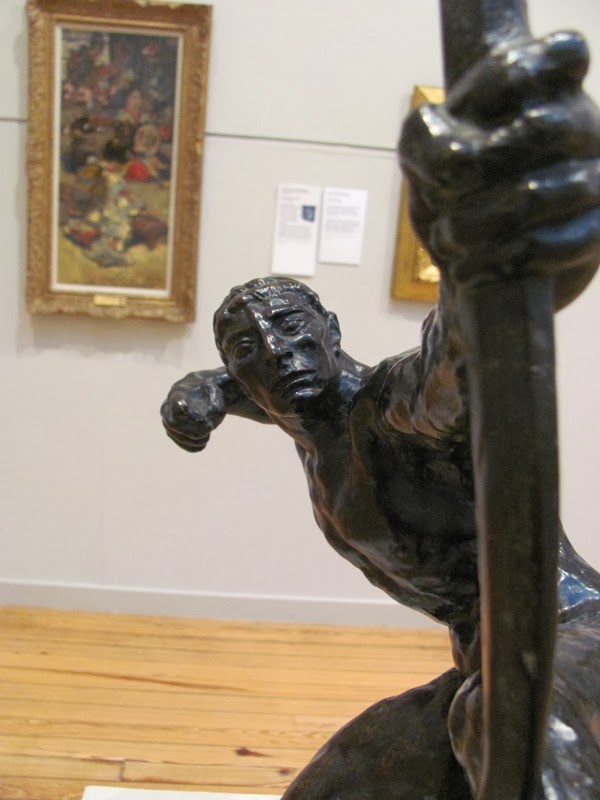 The next three paintings somewhat defeated my camera. This is a slightly blurry picture of The Reaper (1863) by Thomas Faed from Gatehouse of Fleet near here. There are two pictures by him in the gallery - the second one came out even worse in my photos. 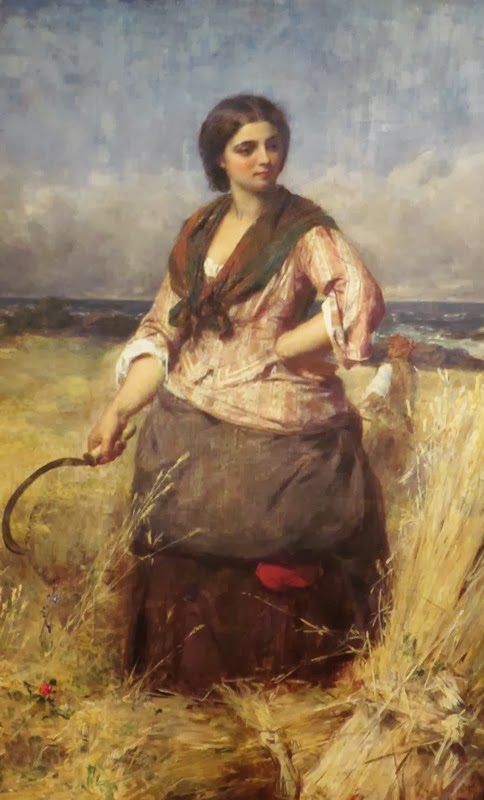 This painting is Una Maja Bonita (1856) by John Phillip . He was born in Aberdeen and not surprisingly features strongly in the gallery. He painted a range of subjects but is best know for his Spanish paintings. 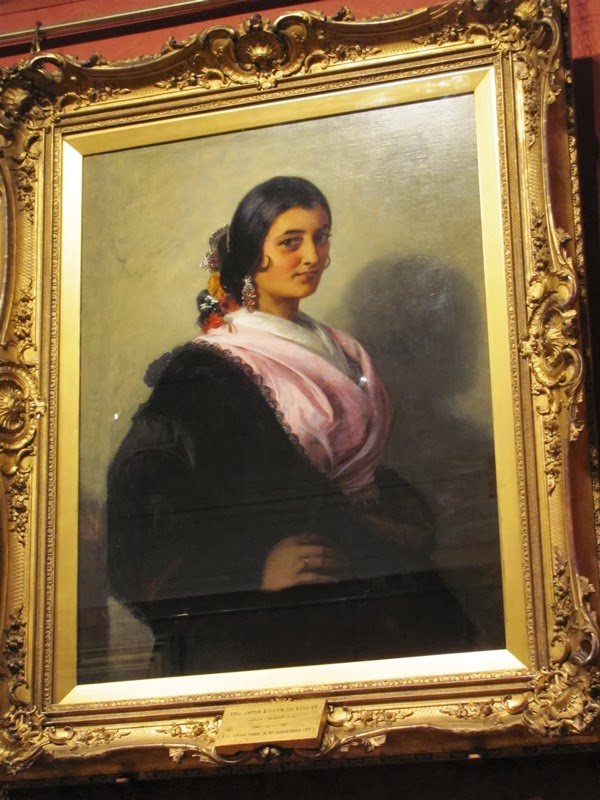 They used to have two paintings by Waterhouse on display but just now only Penelope and her Suitors (1912). It's wonderful but the glazing completely defeated my camera. I did manage this detail. You can see the whole thing here. 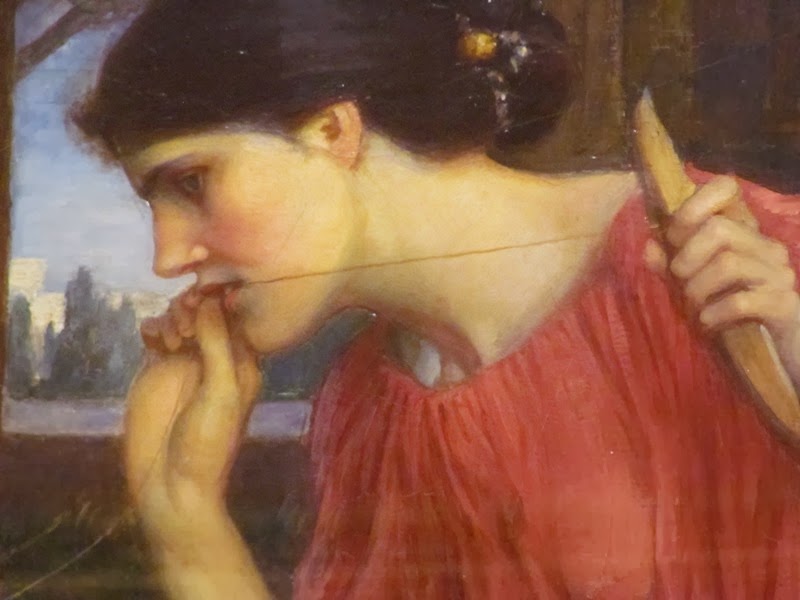 Undine (1875-99) by Albert Ernest Carrier-Belleuse, There is no explanation on the label to say why the date of the sculpture goes to 1899 and the sculptor died in 1887 - perhaps the studio continued to run copies off the mould. 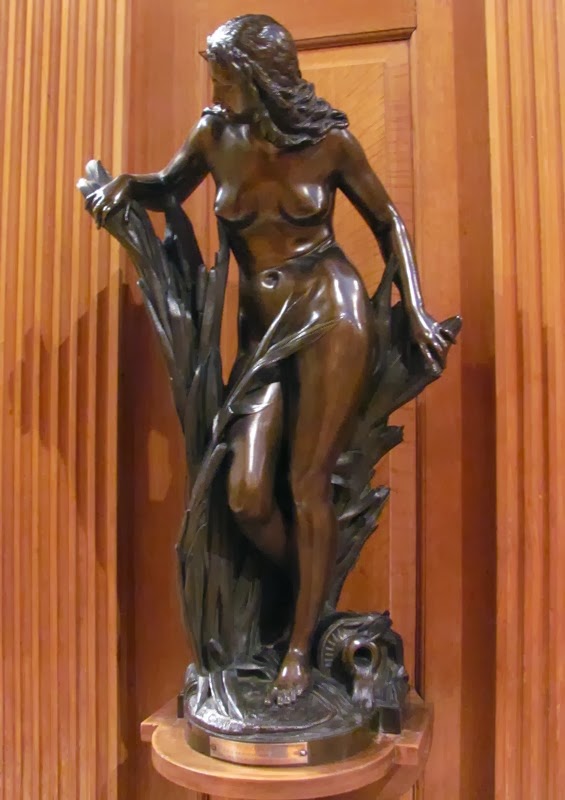 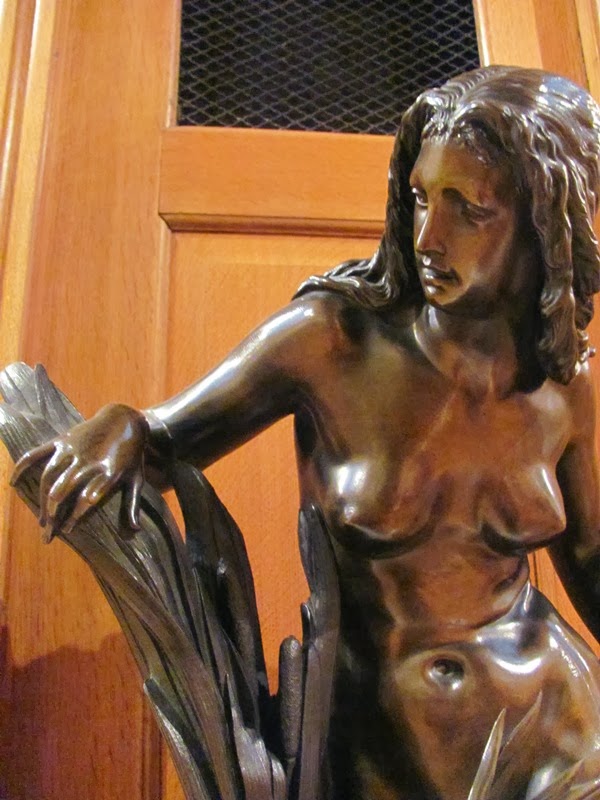 There are a few excellent Scottish portraits in the gallery including many by Raeburn, though I didn't manage to photograph any of those well enough to post. Surely second only to Raeburn, if not equal, is Allan Ramsay in the world of Scottish Portraits. This is Miss Janet Shairp in 1750. 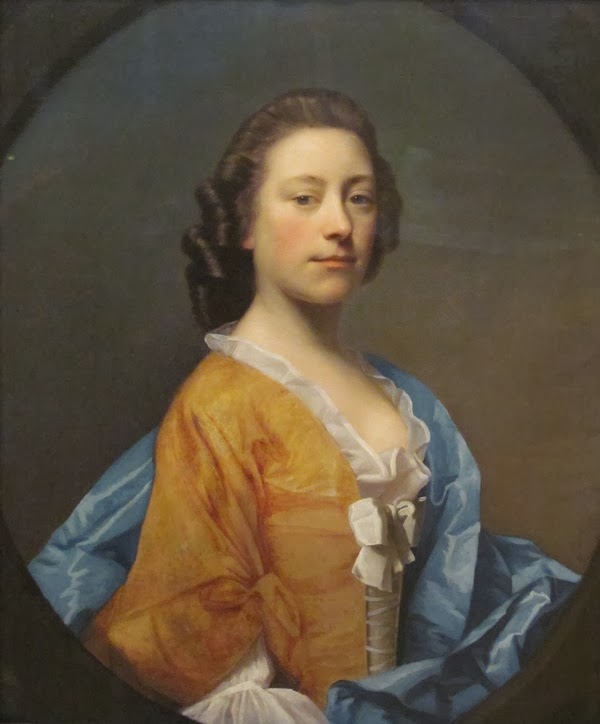 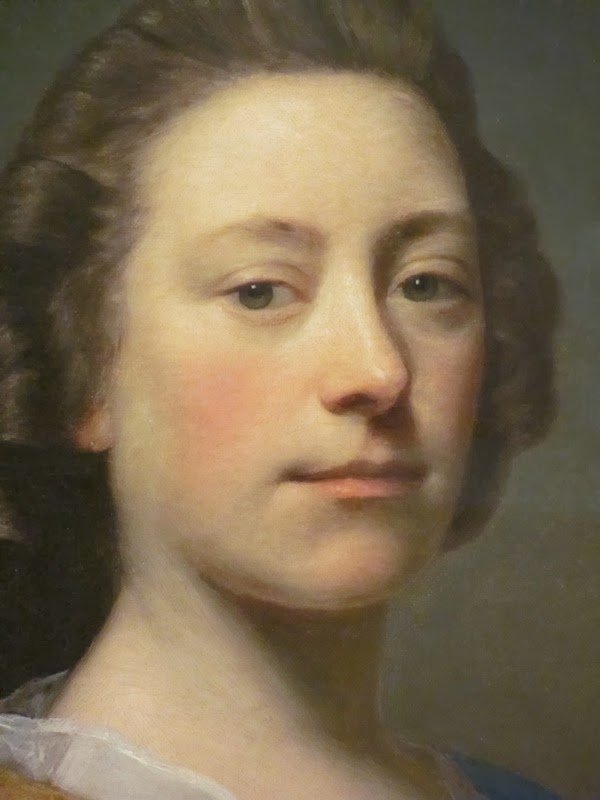 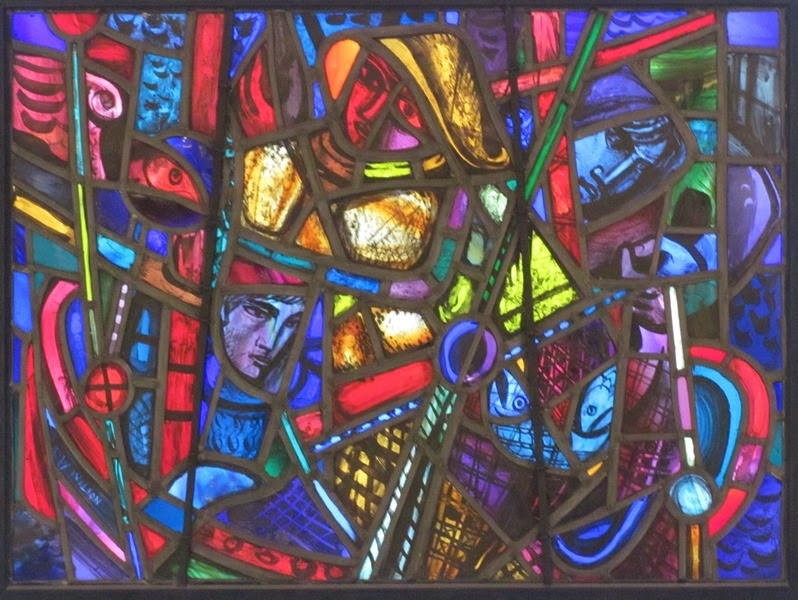 Ian Hamilton Finlay's La Femme de la Revolution (2003). The table features elegant place settings for several prominent women of the French Revolution - I'm sure the dinner wouldn't have been as polite as the setting suggest as these ladies came from both sides. 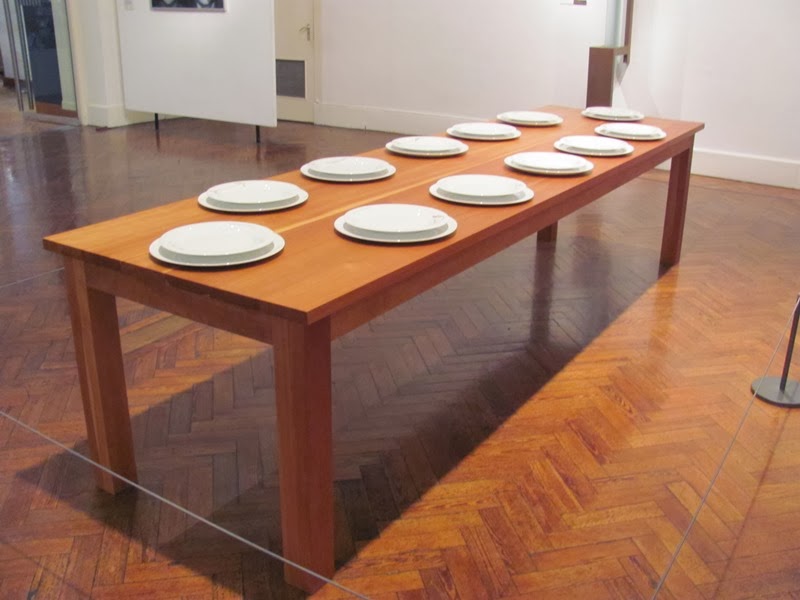 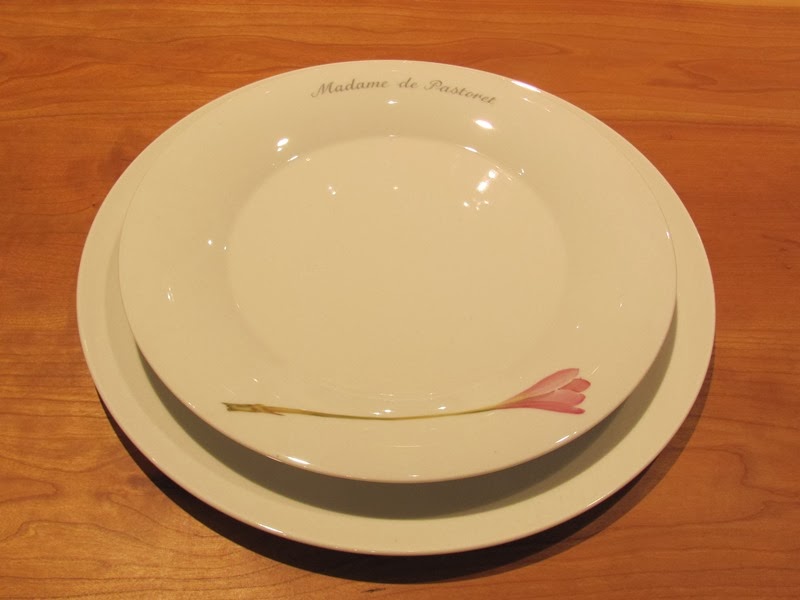 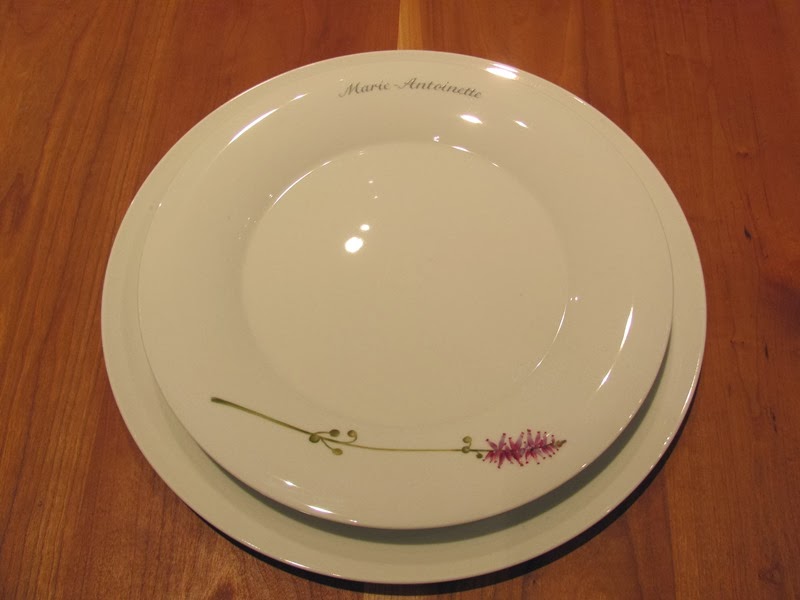 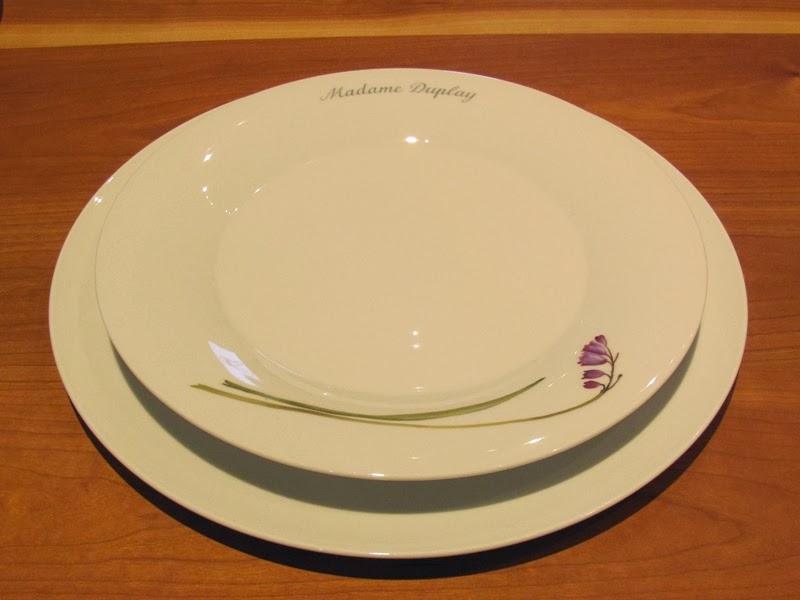 Riviere (2000) by Alison Watt.  I've always felt that I could just fall into this huge painting. I've seen many paintings by her on my travels and can't recommend too highly popping into Old St Paul's church in Edinburgh to see her spectacular Still. 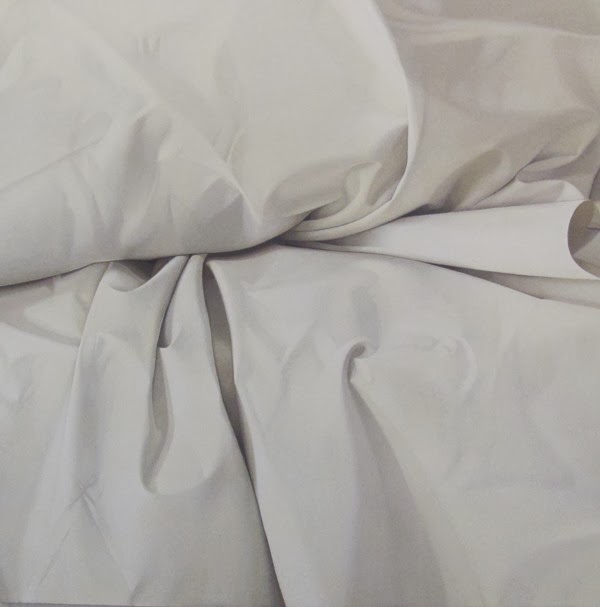 And finally a small word about the gallery itself. Aberdeen is famous for granite and the pillars in the main court of the gallery are made from various granites from near and far. 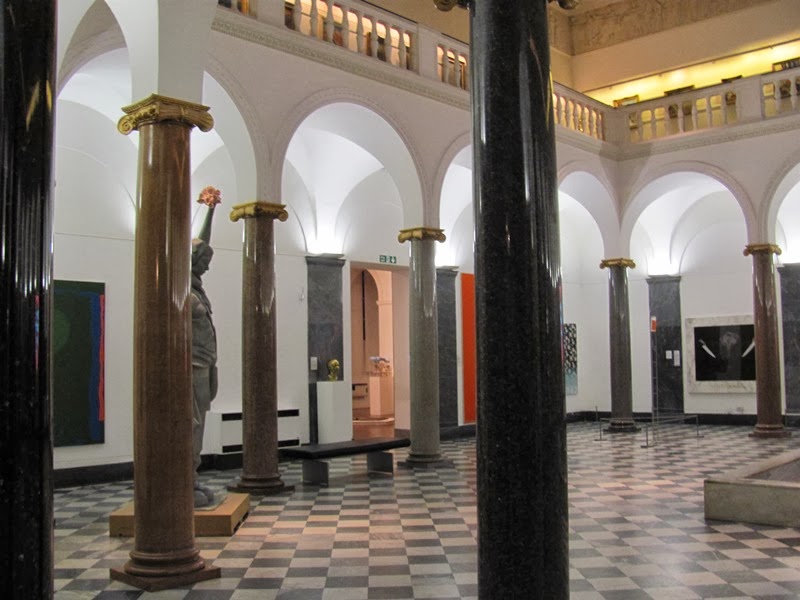 Each pillar has a little brass plaque on it to say where it comes from. Peterhead is about 30 miles from Aberdeen. 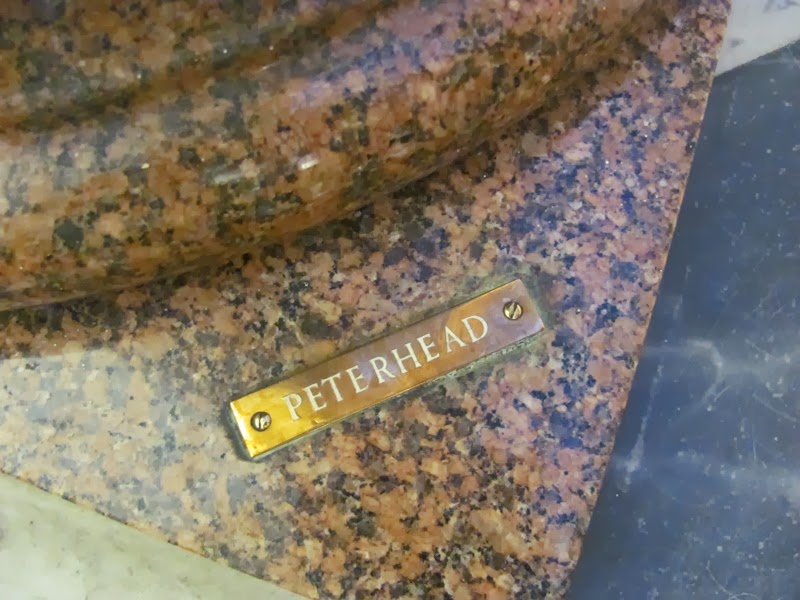 This one is a little more exotic, it's Emerald Pearl granite from Norway. 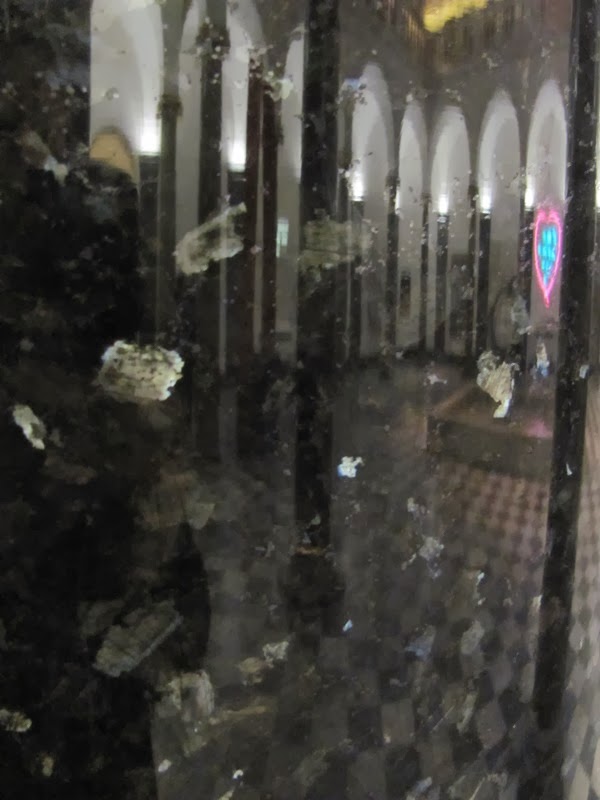 Posted by Sandy's witterings at 22:08

Some very lovely pieces here; I think you are right about the sandstone on that sculpture - it adds a real warmth. When I saw the picture of the gallery itself, I immediately thought of one of those Dutch church interiors from the 17th or 18th century.

The pillars do give the gallery a church appearance. I see I've accidentally got their Francis Bacon sculpture in there (it's the golden thing in the distance). Thank goodness you can't make out the details - it's horrible.

There are some lovely pieces there, thank you for the tour. X

A big regret in my life has been my inability to really appreciate art in it's variety of forms.
I think it's probable due to me being envious of the artists.
I did once sculpt a wooden red indian, but I guess it must have ended up in the dustbin.
Some of these are quite magnificent works of art Sandy.
Talking of my fellow Fifer Jack Vettriano. I was holidaying with relatives in Connecticut when his name came up. I wondered what part of Italy he was from before being told by my Scottish born sister-in-law that he was a Fifer.
This post's saved me a trip to Aberdeen, thanks Sandy.

Wood on the Downs is nice. Thanks for the tour, I'm happy more museums and galleries are allowing photography.

Jim, appreciating all art is far from expected - there are great piles that quite frankly leave me scratching my head and worse make me wish I'd never looked that way (Francis Bacon!!)

I'm with you on Wood on the Downs Pam - well of course I am or I wouldn't have posted it. I couldn't think of very much to say about it. It's got an air of the prewar about it even though it's just trees.

Yay, allowing photos now = good. I especially love the painting by Bessie MacNicol, although I hadn't come across her before. I agree it is very much influenced by Hornel, I love the loosenss of the paint and the tones used. There is something so tactile about sandstone, it is an much more earthly material than granite, marble etc. When I worked at the Swans the stonemasons, it was a joy to be able to watch the sandstone being sculpted into beautiful shapes. See you soon for more tunes I hope!

You really scored! Love The Woods but all is beautiful.

Nice information on here, I would like to share with you all my experience trying to get a loan to expand my Clothing Business here in Malaysia. It was really hard on my business going down due to my little short time illness then when I got heal I needed a fund to set it up again for me to begin so I came across Mr Benjamin a loan consultant officer at  Funding Service He asked me of my business project and I told him i already owned One and i just needed loan of 200,000.00 USD he gave me form to fill and I did also he asked me of my Valid ID in few days They did the transfer and my loan was granted. I really want to appreciate their effort and also try to get this to anyone looking for business loans or other financial issues to Contact Mr, Benjamin Email: 247officedept@gmail.com  He is also available on WhatsApp Contact:+1-9893943740.