From the first full day of my little tour to the last. I had arrived in Wales the Wednesday afternoon to visit Bev and on the Thursday we drove over to Chester for a look about. The main event of the day was definitely a look at the Cathedral where we found this magnificent window in the refectory. One of the ladies serving food took ten minutes out of her day to show us a few points about the window, which greatly increased our appreciation of it.
The window was made for the cathedral in 2001 by Rosalind Grimshaw. Each panel represents one of the 6 days of creation. The dove of peace over the top of the window is patently obvious but I didn't notice until it was pointed out to me that the hand of God is outlined in white right across the whole window. 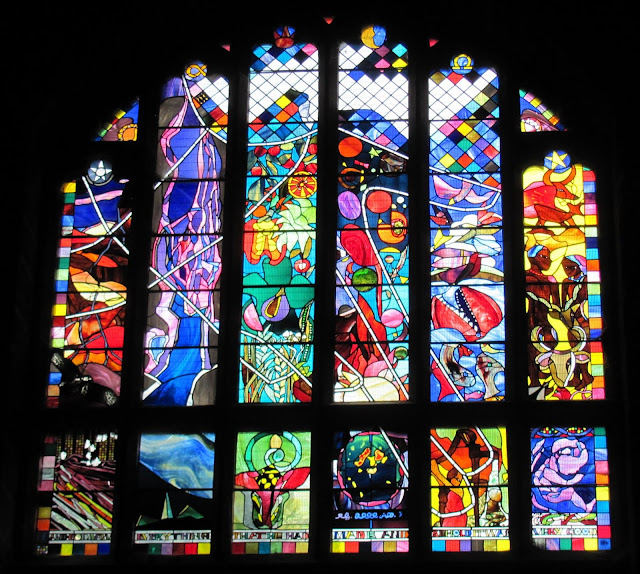 Days 5 and 6 - creatures of the waters and the sky and the land  and man. 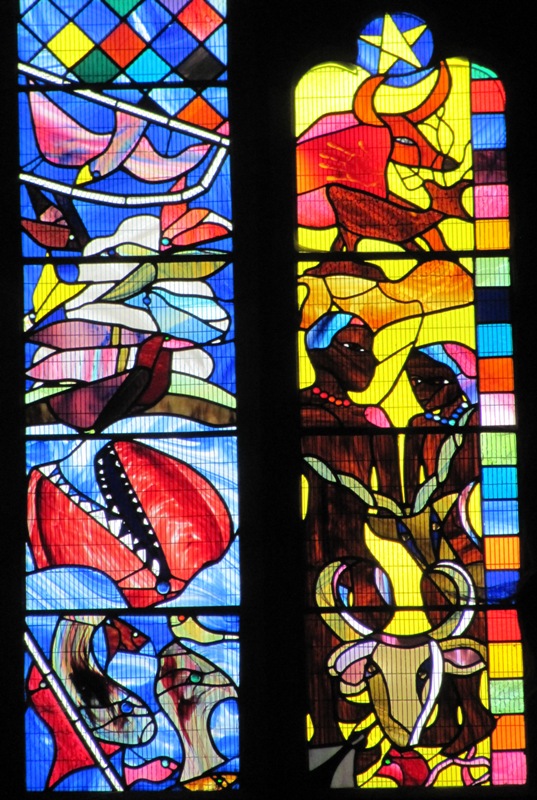 In the picture below, just  underneath where the two white lines cross is a butterfly. This was drawn by the artist's daughter. 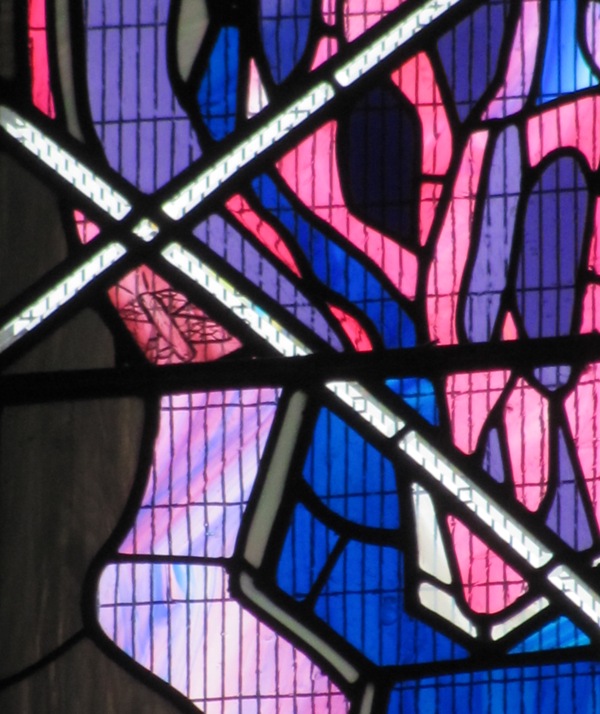 The bottom parts of each of the 6 panels all show a more human aspect of the 6 days of creation. Below for the 6th day, when man was created, we see an ultrasound picture of a baby in the womb. 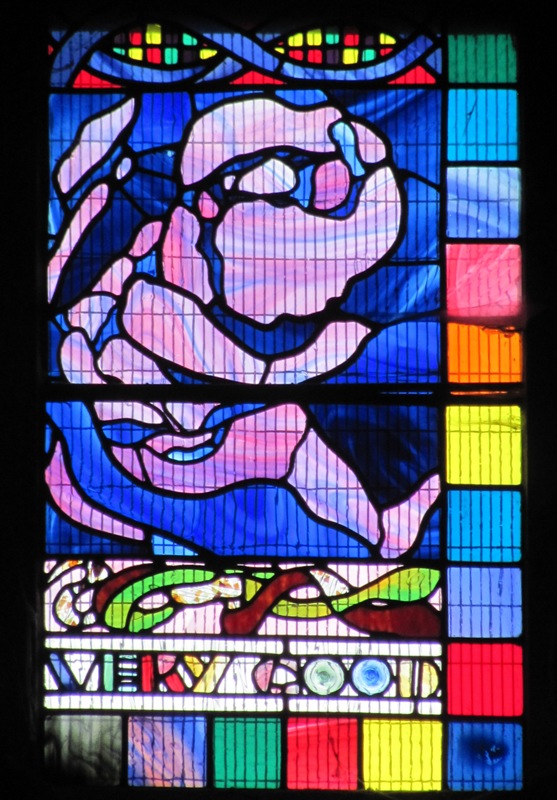 In the 1st day frame, Ms Grimshaw reproduces the effects of long exsposure photographs of traffic moving on a road, to convey the creation of light. In the background are urban towerblocks. 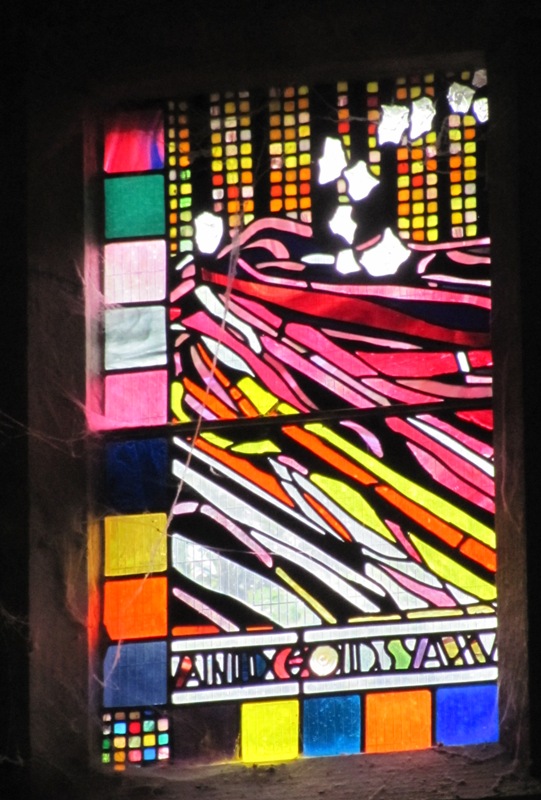 For the creation of the Earth she has pictured the earth as it would be seen from the space shuttle - part of the shuttle can be seen in the bottom of the picture. 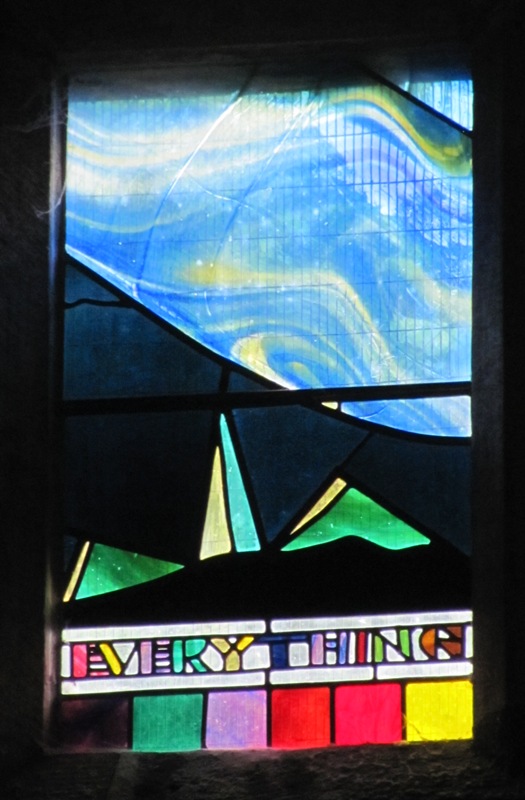 As if the window were not remarkable enough on it's own, what makes it doubly so is that in 1983 Rosalind Grimshaw was diagnosed with Parkinson's disease. This is represented in this panel which shows the brain scan of a person suffering from Parkinson's. 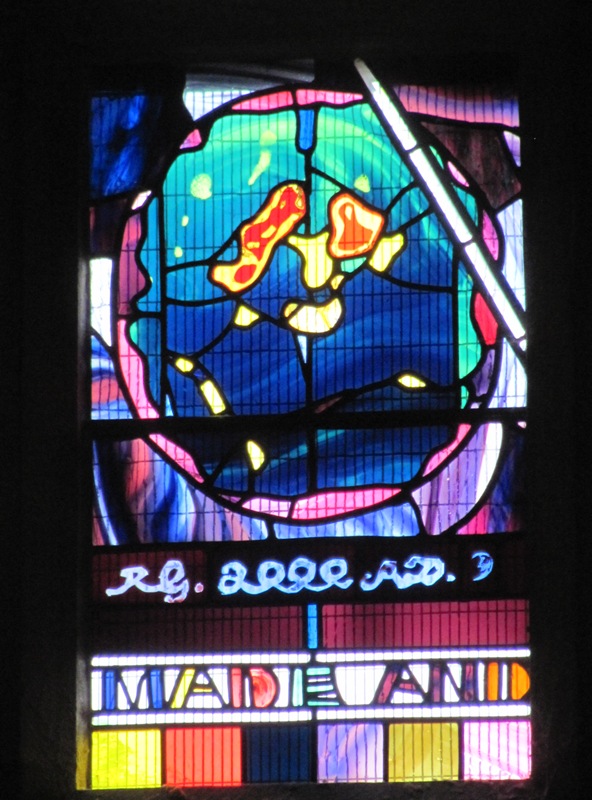 Posted by Sandy's witterings at 14:12

Sandy, the creation window is certainly incredible, I had to scroll back & forth took look at it several times just to get a perspective of it's true inner workings!
Michael

I agree the window is just wonderful, even more so knowing the lady who created it has Parkinsons Disease, what a talented lady!

Wow, I don't think I would have seen much of that had not I been guided through it. No disrespect to the artist, more just my lack of imagination.

What an incredible piece of craftsmanship, especially for someone with Parkinson's! Excellent post, Sandy!

What they all said. It never hurts to have details pointed out to you.

Thank you for your comments good people.Seems you're all saying more or less the same thing - It's just a bit of a modern wonder made all the better for having a few things pointed out.

Great post Sandy.
I did visit Chester Cathedral back in 1965,it's a magnificent building.

I usually prefer simple and clear designs, but this window is so exuberant and full of clever details that it won me over. It was also perfect for illustrating a pair of haiku that I had just written.

With appropriate credit, I used the overall photo when I posted my haiku. I also encouraged viewers of my post to look here for fascinating discussion and beautiful closeup photos, and I was pleased to hear that some of them did so.